Tina Murphy begins her first season at the helm of the Cavalier women's soccer program.

As a collegiate player, Murphy competed for The University of North Carolina Tarheels. During her time with the Tar Heels, the team won 4 National Championships, and 5 ACC Championships. She was also named to the ACC honor roll and dean's list.

Post-college, Murphy played professionally for the Brazilian 1st Division teams, Santos Futebol Clube, and Ferroviária Futebol Clube; and also in England for the 1st Division Bristol Academy Football Club. When not playing soccer abroad, Murphy competed for the Charlotte Lady Eagles of the W-League from 2001-2008. She was named Charlotte's captain in her first year with the club and retained the role until retirement. Twice Murphy was named All W-League and she is the Eagles' all-time leading goal scorer and points leader.

"I'm thrilled to welcome someone of Coach Murphy's caliber to our Cavalier family," said Montreat athletic director Jose Larios. "Tina brings with her a remarkable playing history and coaching experiences at the highest level. Her leadership qualities, life experiences, pursuit of championship-caliber soccer, enveloped by her heart for our Christ-centered mission made Coach Murphy stand out above our other candidates.”

Prior to Montreat, Murphy was a Head coach in the Brazilian professional league; an Assistant Coach at Division 1, Liberty University 2011-2013; and a Head coach at NCFC Youth. 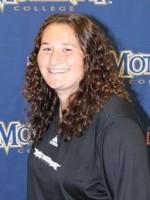